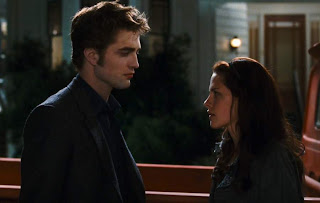 Q: What’s the movie about?

A: Vampires, Werewolves and teen angst. Oh my God-- can you believe Edward actually dumps Bella?! I mean his reasons are good, but still! And then her only choice is to fall into the loving arms of Jacob-- who's a werewolf-- which is totally, like, an enemy of a vampire!

Q: Is this movie worth the price of admission?

Proceed with Caution. If you are a teenager, definitely. Or, of course, if you are a Cougar who likes looking at young men with their shirts off. And really, who isn't?

Q: Will this movie make me laugh?

A: In true Twilight form, most of the laughs come from the cheesy special effects.

Q: Will this movie make me cry?

A: Only if you wanted to see more of Edward because he’s hardly in this film
(nor was he in the book much).

Q: Will this movie be up for any awards?

A: It's got the Teen Choice awards in the bag... but we knew that before the film even came out.

Q: How is the Acting?

A: Nothing spectacular, but no one is going to worry about what's coming out of those mens' mouths, because they're too busy staring at their shirtless werewolf bods.

Q: How is the Directing?

A: Better than the first film. However, in the book, Bella just heard Edward's voice in her head, whereas in the film, the director made the bad choice of showing him as a floating vision.

Q: How is the story/script?

A: Fairly true to the book. But I found it frustrating that this story
portrays a weak female who gives up on life when her boyfriend breaks up
with her. And she pines over the bad boy who left her, instead of giving
the nice boy a shot. Finally there are times when the story feels like a
classic case of domestic violence. The women (Bella and Sam’s wife) are
hurt by their “monster” men, but love and stay with them despite this. If I
had a daughter, I wouldn’t be thrilled that this kind of story and
characters is one that teenagers love and value. It’s a sad statement on
our society.

Q: Where can I see the trailer?

If you are using Chrome or Safari to view this site, you may have to "allow pop-up windows for this site" (as an exception to your blocking rule) for the drop-down function to work. Thanks!

My Interview on ActorsE Chat Show

Elisabeth Smithee
Elisabeth Smithee has over 15 years experience working as a writer, director, and producer of film, television and web shows. She has a degree in Theater, Film and Television from UCLA. Using her knowledge and expertise of so many areas of filmmaking, she has reviewed movies professionally for over 4 years, answering all the essential viewing-related questions for you.