Why Did I Get Married Too? 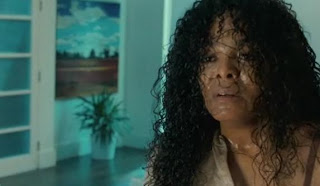 Q: What’s the movie about?

A: This dramedy recruits Tyler Perry's same old crew of happily married couples, to go on their annual retreat together, where they can once again discover how messed up their relationships are. And guess what? This time, they have a whole new set of problems.

Q: Is this movie worth the price of admission?

Go! I'm talking to you white people. First of all, because the Black people have already seen it. But mostly because you people probably haven't ever seen a Tyler Perry film, and it's time you found out what all the hype is about. Yes, I said, "You people."

Q: Will this movie make me laugh?

Q: Will this movie make me cry?

Q: Will this movie be up for any awards?

A: Hype point number 3: There's a reason Tyler Perry has almost as much money and power as Oprah.

Q: How is the Acting?

A: If this weren't seen as a "Black movie," Janet Jackson would be up for an Academy Award. Yes, I just played the race card, without even being Black. (It was fun, by the way) But what is especially weird about my above comment, is that at the beginning of this movie I hated Jackson's performance so much, I was pretty sure I was going to rip her shreds, right here, in this section. To my surprise, later in the movie, I realized that her terrible acting was a character choice.

Q: How is the Directing?

A: Tyler Perry deserves to have all the TV shows, movie deals, studios, and creative control that he gets.

Q: How is the story/script?

A: It is overtly clear that Tyler Perry comes from a theater background, as all of his self contained talking scenes are strung together in a play-like structure. But it's also clear that he is a good theater writer, as his conversations about overdone things, like what makes up a good relationship or marriage, still manage to cover new points of view. Or at least hold your interest as if you were sitting around talking and laughing with your own best friends.

Q: Is there anything else worth mentioning about the movie?

A: I don't want you to get your hopes up too high, the movie's not perfect. The structure meanders and it sometimes feels too long. I just want you to see it because I think you may be underestimating Tyler Perry, and his seemingly effortless ability to get across a good, clean message about good, clean people.

Q: Where can I see the trailer?

I just want to know who designed Sharon Leal's dresses in Why Did I Get Married TOO?

I loved the movie, the end I would have done differently! That should not have happened to Gavin and pat should have been admitted! But all and all the movie was wonderful! I enjoyed all the actors, they did a wonderful job! Got to love Angela ;)))))

If you are using Chrome or Safari to view this site, you may have to "allow pop-up windows for this site" (as an exception to your blocking rule) for the drop-down function to work. Thanks!

My Interview on ActorsE Chat Show

Elisabeth Smithee
Elisabeth Smithee has over 15 years experience working as a writer, director, and producer of film, television and web shows. She has a degree in Theater, Film and Television from UCLA. Using her knowledge and expertise of so many areas of filmmaking, she has reviewed movies professionally for over 4 years, answering all the essential viewing-related questions for you.